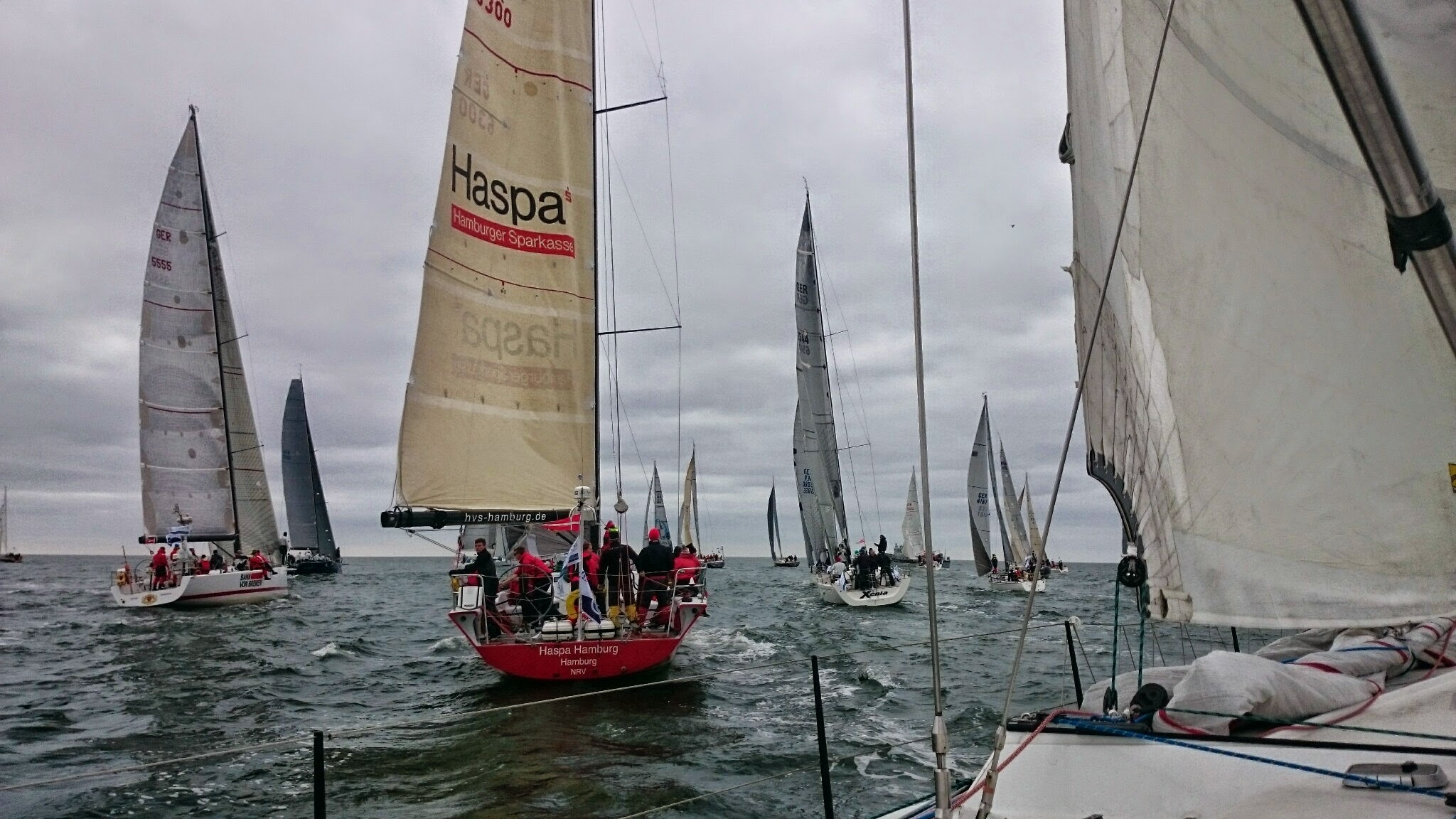 Nordseewoche 2015. After a two year break we spontaneously decided to join Germany’s only offshore regatta in the North Sea – even though previous races had been dominated by unpredictable weather conditions with thick fog and dead calm determining the grib data. We had a feeling this year would be different.

After a relaxed transfer through the NOK – always a beautiful sightseeing tour, especially with good weather – we took off towards Cuxhaven. From there we joined the feeder regatta to Helgoland at the crack of dawn on Saturday. Despite a starting field of about 50 ships, few were serious competition for the 82’ we were on, even though “First Ship Home” kept pressuring us the entire race. Navigating the first 10 buoys by borderline draught against the shorter (57’ Cantingkeel-Yacht with a full crew) but modern racer in the lead actually proved to be a little challenging for our 5-member crew. With front winds of 5-6 Bft and choppy waters caused by winds against the current, conditions were definitely not comfortable – but what do you expect during a regatta? The fruits of our labor culminated our first day of the Nordseewoche 2015 in a clear signal for “First Ship Home.” Our ORC-ranking score ultimately placed us a satisfactory middle-field.

Sunday. 3-4Bft northwest, cloudy at first, but things cleared up with 2Bft winds during the day. Perfect conditions for our ship considering the competition – well, at least for the upwind courses. Every sailor speaks of the amazing advantages of downwind courses, but considering our status quo: an absolute minimally staffed crew – mistakes were practically waiting to happen.

Starting shot. We have a great starting position to reach the first windward buoy with our above-average speed, but unfortunately there was false start in the field and a restart was ordered. What began as a mild disappointment became a real annoyance as the first gear of our Mainsheetwinch failed. No time for repairs now – we’d have to take care of that in port after the race. The result of the technical “fuckup” was permanently having to ease the sheet. In spite of this, the first upwind course gave us the lead. We set our genaker on the two successive downwind courses, which then had to yield to the smaller free-flying Spinnaker for the up-n-down course. Setting the Spinnaker, we caught a twist in our sail which ultimately cost us the lead; we could feel our rating progressively getting worse as the smaller, more maneuverable “Opal” became lost in the distance. Having to deal with a further technical difficulty with 6sm left to go – the overdrive of our stb-backstag-winch went bust – we began to reassess our expectations. The all-decisive question hung in the air: would we be able to realize our goal of being first-ship-home despite all kinds of technical and human mistakes? – “Never, the Opal is gone – we might as well ignore the buoys and sail straight to the finish” – “Never give up!!! We still have 3.5sm upwind course – we can reach the finish and could set our Code0” – “Ok! Clear everything, set all sails to speed – the wind is letting up…this is our chance!!!!”

A few turns later both ships were on par. The downturn winds really did us a favor, letting us pass the final windward buoy by a hair despite the unfavorable currents – something our competitors weren’t able to do. Easy finish for us at the end.

A sailor’s bride is the sea.