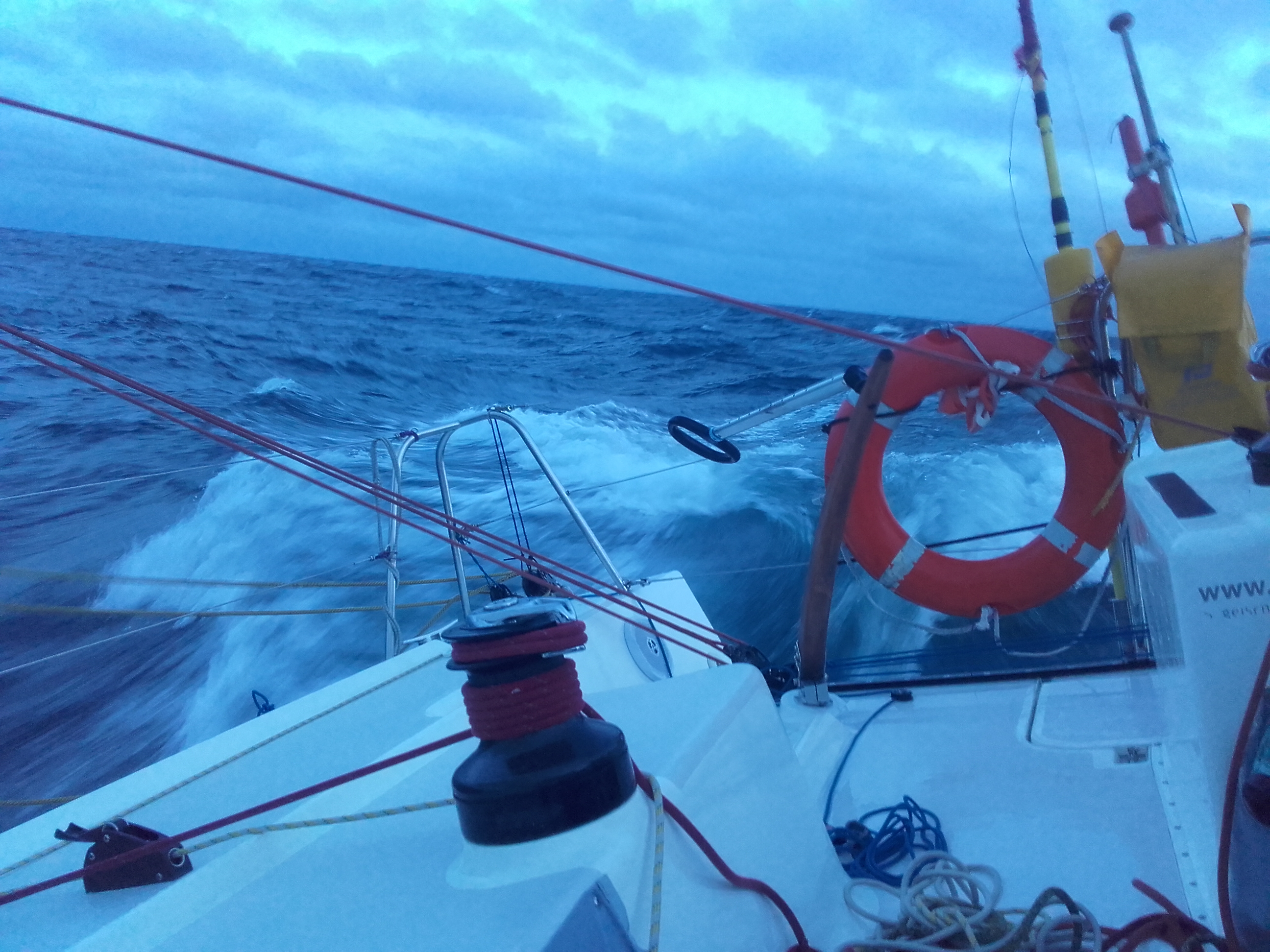 This year Sailing Island went to Helgoland for the North Sea week and then the Rund Skagen regatta. Traditionally, the North Sea Week always takes place at Pentecost. Due to the early date this year, summer temperatures were unfortunately not to be expected. So it happened. At the first crew meeting on our boat, the Pogo 2, in Cuxhaven the sun was shining, but it was still not more than 12 degrees. The wind had turned to the northwest and freshened up properly.

Since we started the North Sea Week with a colorful team, we did not take part in the Cuxhaven-Heligoland race on Saturday, but sailed a small match race against our sister ship, the Pogo 1, on our own. Meanwhile, the wind had reached 6 to 7 Bft . increased, in the gusts also clearly above and yet our Class 40, which is actually designed for long space sheet strikes, bravely fought with the crew in the choppy wave of the Elbe estuary. The real North Sea weather ensured that the Helgoland harbor was as empty as I had never seen it during a week in the North Sea. Around 60 boats were in the harbor on Friday evening.

The training planned for Sunday was relatively short due to the stormy conditions and after the obligatory MOB maneuver and a couple of turns and jibes we went back to port. The last steps on board were done there and we found some rest before the start of the next day.

It finally started on Monday. The wind had dropped to 20 knots. According to Meno Schrader, from whom we received a weather briefing before the start, the wind should turn further west during the day. With a little luck, this lathe should be able to bring us an investor to Horns Rev, the first waypoint off the west coast of Denmark. First, however, it was time to set a storm sail, drive with life jackets, life belts and AIS to the check-in to pick up the OK from the regatta management.

The first start was at 4:00 p.m., we were in the third group at 4:20 p.m. At the start everyone drove very cautiously. No wonder, because nobody wanted to be pushed over the line from aft too early in case of wind and electricity. We got off the road well but did not set the Genaker because the risk was too great for us and the distance too short. So we only sailed with Genoa for a short time around South Dune and then with the wind northwards and into the night. Unfortunately, the jetty to Horns Rev didn’t turn into anything, so we had to make two turns shortly before. We didn’t miss much, but you just noticed that the Pogo was not built for upwind courses. After Horns Rev our course became more and more space, on the one hand the wind turned further west and on the other hand we could always descend towards Jammerbug and Skagen. Then it happened in the middle of the Jammerbug: when we got out, the rear end of the slatted pocket of the spreading slat tore. So the latte, which ensures that our issued top is neat. So we first had to pull the mainsail down without losing the batten and then we tried to patch the whole thing. The mainsail went up again after half an hour. Just so that shortly afterwards the crossbar bows far into the cold North Sea. In this action we lost about an hour in which the Pogo 1 and a few other boats slipped through us. After a short consideration, we decided to continue with the injured Groß. From there it always felt like 1st reef, because the upper 2 meter sails simply folded away towards Lee and a bit more carefully so as not to completely ruin the big one.

As the wind continued to freshen up on Tuesday night in Skagerrak, we were able to fully exploit the properties of our Pogo. 30 to 35 knots from the west resulted in a top speed of over 18 knots and a fast drive towards Skagen, the actual turning point, with the 1st reef and genoa. When it went around the corner, the wind subsided again to turn south and so we had to cross again.

Before Greene we had to make a decision: stay under land and hope that with the thermals there is more wind than outside or far east and waiting for the southeast spinner. We choose to stay under land. The Pogo 1 and a few other boats, however, went to the east, which was the better decision in retrospect and as a result we lost another hour, which we could not catch up to the goal in Kiel.

During the night on Thursday the wind continued to dwindle and so we finally parked on Thursday noon about 20 miles in front of the Great Belt Bridge for 3 hours in brilliant sunshine.

We took the opportunity to swim, take a shower, eat something and especially