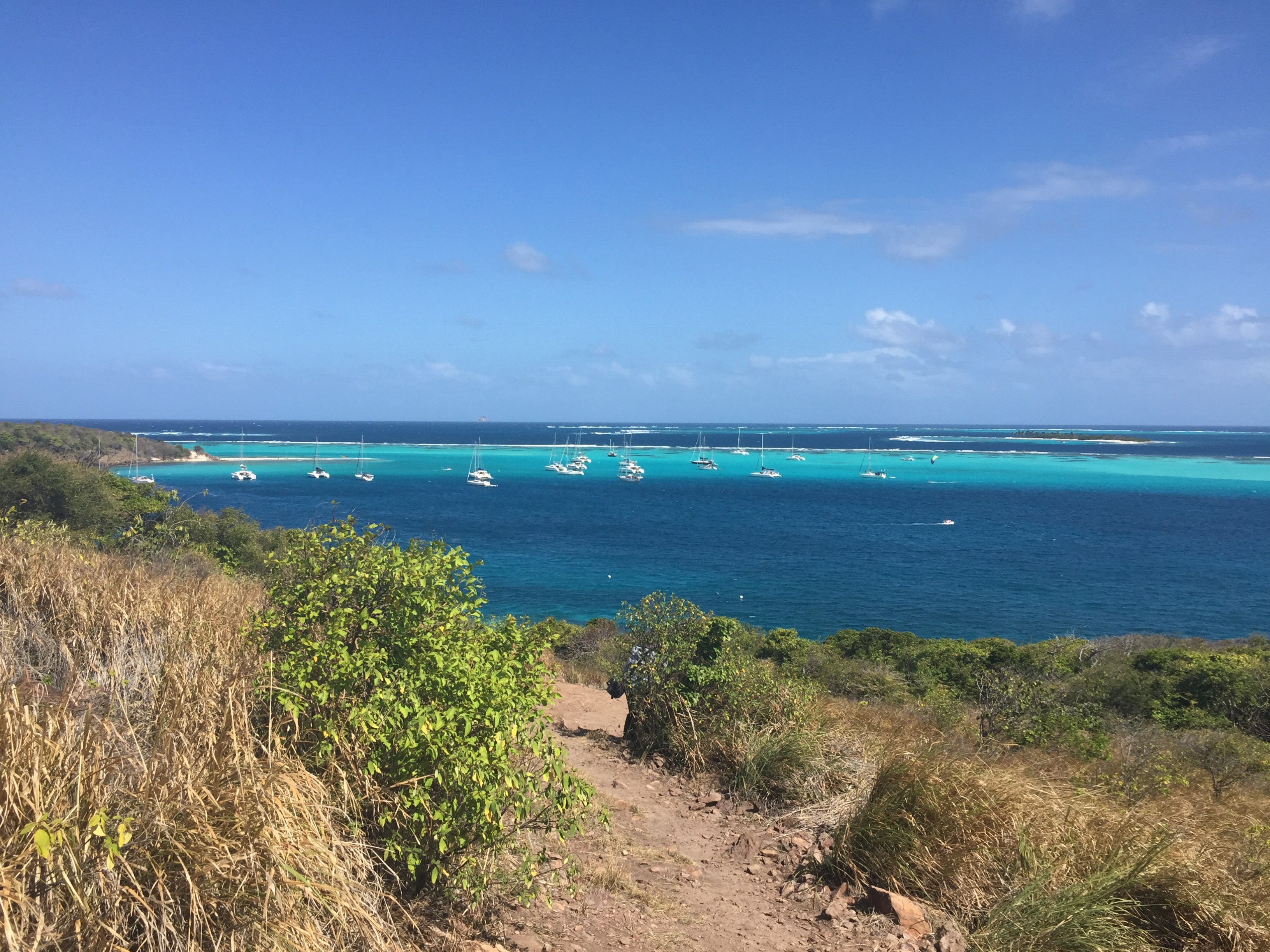 Well, we didn’t actually get to see any pirates, even though the odd Boatboy could have passed for one, but a few of the locations the movie was filmed were on the list of the Windward Tour this winter. Thank God the Caribbean is more blessing than curse for sailors these days. By the way, “Boatboys” are a particularly annoying phenomenon found in the English-speaking, more or less poor Windward Islands of St. Lucia, St. Vincent, the Grenadines and Grenada. Well, poor at least in comparison to Martinique, which belongs to the EU. On the one hand, these motorboat-driving merchants are quite helpful, providing everything from ice to fresh fish, or even offering guided tours of the islands and help with docking. On the other hand, they never fail to try ripping off “Yachties” with exorbitant prices. But if you catch the most likable Boatboy in the bay and tell him you’ll be around often, and offer to work exclusively with him in exchange for getting ripped off less, you’ll be fine and are spared any future annoyances with the others.

For the most part, the trip was between Le Marin on Martinique and Petit St. Vincent, the most-southernly Grenadine Island still belonging to St. Vincent. There and back. The island of St. Lucia lies between Martinique and St. Vincent, and is more developed and definitely more tourist-y than St. Vincent. St. Lucia really only has 3 bays: Rodney Bay, Marigot Bay and Soufriere & the Pitons, the symbol of St. Lucia – even the local beer was named after it. The Rodney Bay is actually quite large – destination of the ARC every year, surrounded by huge hotel facilities (at least that’s what it feels like coming from the smaller Grenadines) and a modern marina in the middle. But it’s not a highlight – landscape-wise at least. Marigot Bay on the other hand is an absolute beauty: also a tourist attraction, but less so, and smaller with only a few restaurants and hotels on the shore. And Soufriere is like most Caribbean towns: colorful from afar, dirty up close, loud with streets full of merchants and beggars, and bars full of patrons drinking beer and rum and smoking. Nevertheless, it was a nice change of scenery to complement the gorgeous bays.

St. Vincent is usually passed by sailors on their way to St. Lucia in the Grenadines, but they also pass up some of the most beautiful bays in the Caribbean – full of turquoise-colored water, black sands, and thick jungle growing directly on the edges of the beaches. Wallilabou Bay is just such a place; unfortunately the exceptionally annoying Boatboys ruined it for me, but it was one of the main places Pirates of the Caribbean was filmed on-location – actually, part of the Port Royal scenery is still there, making it a must-see for fans of the movie. The Grenadine Islands are just south of St. Vincent and stretch over 40 sea miles from Bequia to Carrricou, that actually belongs to Grenada, and are the epitome of the Caribbean: water in all shades of blue from deep navy to turquoise, and white beaches framed by coconut palms bordered by jungle. Of course, beach bars abound for the obligatory sundowner. Basil Bar, voted #37 on CNN’s “Best Beach Bars in the World” List, was definitely one of the top beach bars, on the “rich-and-beautiful” island of Mustique. Definitely a contrast to the boring beach bar on the resort-island Petit St. Vincent, where a one-night stay can cost 1700 USD – not a surprise then, that the similarly boring beach bar charged 15 USD for a Mojito, although it was in fact exceptionally delicious.

The absolute highlight of our tour: the Tobago Cays. Even if other locations have beautiful beaches, sparkling water, and colorful underwater spectacles: the total package the Cays offer behind the Horseshoe Reef is unparalleled. After a beach stop on Jamesby, watching turtles on Baradel, climbing a hill on Petit Rameau to enjoy the view and enjoying a lobster BBQ, you think you’ve reached paradise instead of the Cays. The tiny island of Petit Tabac, in front of the Tobago Cays, is a further highlight for Jack-Sparrow fans – for everybody else it’s the perfect place to have a midday stop with white beaches, palm trees and a swim in the reef-protected lagoon. It’s the island where Jack Sparrow was cast-away with Elizabeth Swann in the movie. It would get to be a bit lonely after a while, but absolutely beautiful for a few hours. All in all, the Grenadines are a phenomenal sailing area. Thanks to the Passat, a steady wind is always blowing, but islands and reefs protect you from the waves of the Atlantic. And even though the sun is always shining, with the exception of a few short showers, the light breeze keeps things comfortable. The innumerable islands and bays to discover make the Caribbean the perfect place to escape the winter blues…